The current inventory of 600+ rifles, 24 machine guns, 24 M203’s and 350 M9 handguns, were stored in traditional military rifle racks and homemade boxes using every square foot of vault space. At the beginning of each shift, members of the security forces would be issued their weapons, typically consisting of an M4 carbine, 30 round magazines, an M9 handgun with magazines, a radio and night vision gear, through a security window in the vault. Members at the end of their shift were returning like weapons.

The varied weapons and equipment stored in different areas of the vault and the long isles required many trips back and forth to retrieve needed equipment. The aisles were so narrow that 2 people could not easily pass.

Inefficiency and logistical problems arose due to the volume of locks being opened and closed. Inspections frequently revealed locks having been left open.

Access to the upper row could be difficult. M4s did not fit properly with scopes or other attachments on the weapon. Scopes and accessories were frequently damaged by the locking bars on the racks. 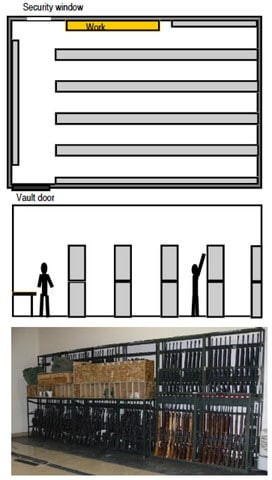 The challenge:
To design an efficient weapon storage solution that could accommodate current inventory with room for expansion. Additionally, it should eliminate the ergonomic problems inherent in using traditional military spec weapons racks housing a modern arsenal. 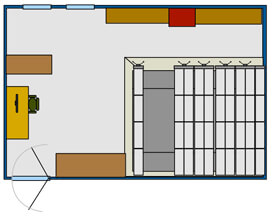 SecureIt® CradleGrid™ equipped Model 84 Tactical Weapon Racks on a mobile carriage system. Weapons and equipment are grouped by team and individual, not by weapon type. Not only does this significantly reduce time and effort managing the vault, the complete system requires 1/2 the floor space previously used.

During a shift change, the vault operators open the required isles and quickly issue each member his equipment and return end of shift equipment to its proper location, all with minimal foot traffic.

There are no locking doors on the weapon cabinets. The entire system is locked by rolling the racks together, closing the aisles and forming a cube, then inserting two large steel locking pins into the floor to keep them from rolling. Mil-spec padlocks are used on the steel pins to prevent their removal. When weapons are issued or returned the system is unlocked (just 2 padlocks) and the required aisle is opened. Once all the transfer is complete, the aisles are closed up and the system is locked back down. These types of system are not authorized in all branches of the military, but there is a significant advantage in security and rapid response and reaction as weapons can be issued very quickly in a crisis situation.